Controlling Your Comfort Room by Room

For over half a century, ZONEFIRST has been the industry leader in zoning.

Starting with the development of the first zoning dampers and registers in the 1950’s to today, with exclusive “Plug & Play” dampers – Zonefirst has led the way in excellence and continued innovation.

ZONEFIRST is the first company that successfully developed and marketed HVAC Zoning Systems back in the 1950’s and is today a leading manufacturer of HVAC zone dampers and zoning systems. 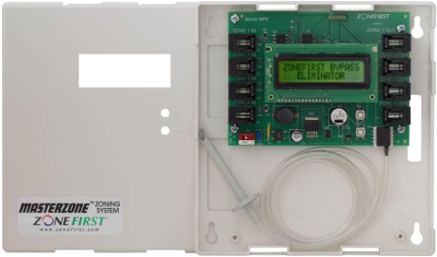 The Bypass Eliminator™ (Model BPE) Control is an interface between a ZONEFIRST Zone Control Panel and its zone dampers.

The BPE is used to eliminate the need for a traditional separate by-pass duct and damper directed back into the return duct.

The BPE can ONLY be used with ZONEFIRST’S Plug-In Zone Dampers and control panels.

For Use Only with ZoneFirst’s Plug-In Zone Dampers